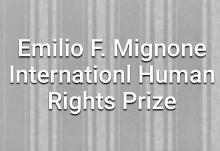 The Argentine Republic invites foreign institutions and/or individuals residing abroad that are engaged in the promotion and protection of Human Rights in their respective countries to submit nominations for the 2020 Edition of the Emilio F. Mignone International Human Rights Award.

The Emilio F. Mignone International Human Rights Award was established in 2007 by the Argentine Ministry of Foreign Affairs, International Trade and Worship to recognize the work of foreign institutions and/or individuals residing abroad in the promotion and protection of Human Rights.

The award is inspired by the life and work of Emilio F. Mignone, one of the main advocates of human rights in our country and a founding member of the Centre for Legal and Social Studies (CELS).

The award seeks to help the winning organization or individual to raise awareness of the issues on which they work, strengthen the bonds with Argentine civil society organizations, and show appreciation for their commitment to the promotion and defense of human rights in their country of origin.

The selection process is guided by the example set by the tireless fight of Argentine human rights organizations, made up of victims, relatives and human rights advocates who have sought to eradicate impunity for the serious crimes committed in Argentina’s recent past, thereby consolidating the process of Memory, Truth and Justice, and strengthening democratic institutions.

The form available at https://www.cancilleria.gob.ar/…/emili…/call-for-nominations must be completed to nominate a candidate. Nominations will be admitted until 31 October 2020.

In all cases, an e-mail confirming receipt of the form will be sent in order to make the nomination official.

The Selection Committee will choose three candidates and submit the list to the Minister of Foreign Affairs for a final decision.

The Award will be given in a ceremony presided over by the Minister of Foreign Affairs and attended by officials from the Argentine Secretariat for Human Rights, CELS representatives and the Mignone family. The award ceremony will be also attended by government officials, members of human rights organizations, members of the diplomatic corps accredited to Argentina, and the general public. As a result of the situation caused by the COVID-19 pandemic, this year’s ceremony will be held online on 10 December 2020.

The Award includes an invitation to the winning individual or to a representative of the winning organization to visit the Argentine Republic for a week. This includes economy class flight tickets from their place of residence, accommodation, and a per diem. During their visit to the city of Buenos Aires, the winner will take part in various meetings and activities with government institutions, human rights organizations, academic institutions, the press, etc. The schedule will be agreed upon with the winner based on their specific area of expertise. As a result of the situation caused by the COVID-19 pandemic, this will come into effect when the sanitary conditions allow it.

Additional information could be accesed through the following link: https://www.cancilleria.gob.ar/…/emilio-f-mignone-internati…